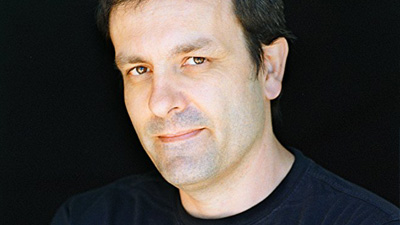 Also known in scoring circles for his orchestrations and conducting, Rupert Gregson-Williams is a composer of film and television music including TV's Veep and the DC Extended Universe blockbuster Wonder Woman. Like his brother Harry Gregson-Williams, Rupert was a lead chorister in one of Britain's great traditional academic church choirs, that of St. John's College, Cambridge. In return for singing with the choir at daily services during the school term and touring with it around the world, he received a scholarship to St. John's College's preparatory school and entrance to Cambridge. Unlike Harry, who graduated from the Guildhall School of Music and Drama, Rupert admits to being a rebellious student who got thrown out of school more than once. He believed that he had all the basic knowledge he needed and went to work as a professional musician, mostly in rock & roll bands, after a stint as a teacher in Africa.

A friendship with composer Richard Harvey, which grew from their shared interest in ethnic music and instruments, led him into film music. Rupert had been intrigued by the use of classical music in film since Visconti used Mahler's music in Death in Venice, and was happy to assist Harvey after the latter got some work scoring for British television projects. The two worked together in collaboration with Elvis Costello on G.B.H. and Jake's Progress, two films directed by Alan Bleasdale. In the process, Rupert learned much about advanced orchestration. His first original score was for an independent film by Genevieve Jolliffe called Urban Ghost Story, which was a coming-of-age drama rather than a horror picture. Rupert composed an intimate score, mainly for solo piano and flutes, but of a substantial length at 50 minutes.

Following that, the iconic film composer Hans Zimmer asked him to join his organization Media Ventures, which provided music for film, television, advertisements, and other commercial uses, including the two-minute piece Rupert wrote for the World Cup soccer finals in Japan. Gregson-Williams worked directly with Zimmer on the score to The Prince of Egypt, composing certain sequences in the film using Zimmer's melodies to the composer's specifications. Other film and television projects followed for Gregson-Williams, including El Dorado, Virtual Sexuality, Muppets from Space, Extremely Dangerous, and Hannibal.

In 2004, he gained notice with the highly lauded drama Hotel Rwanda, for which he was bestowed the European Film Composer Award. From there, he scored such notable films as 2006's Over the Hedge, 2007's Bee Movie, 2008's You Don't Mess with the Zohan, and others. Gregson-Williams subsequently supplied the music for an increasingly higher-profile set of films including 2010's Grown Ups and 2014's Blended, as well as awards season fare like Mel Gibson's 2016 WWII drama Hacksaw Ridge and Netflix's The Crown. In 2017, the soundtrack for superhero feature Wonder Woman, which included Gregson-Williams' score and the original song "To Be Human" by Sia, landed on the Billboard 200 and the Top 10 of the soundtracks chart.