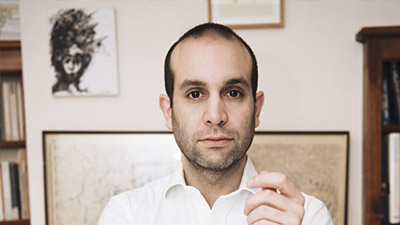 Ilan Eshkeri is an award winning British composer whose work uses multiple disciplines in various fields of art. Composer, songwriter, producer and conductor, Eshkeri's work is performed in concert halls, theatres, galleries and on film & television; his eclectic body of work is linked by his love of narrative.

His diverse portfolio is appealing to creative people from all walks of life, allowing him to work on a multitude of different projects. Eshkeri was commissioned by Burberry for their game-changing autumn 2016 fashion show in London, where he conducted his choral symphonic suite Reliquary, which subsequently reached no. 1 in the classical chart. Before this he created music for British astronaut Tim Peake's Principia mission to the International Space Station.

Eshkeri has collaborated with Annie Lennox on a live orchestral show of her songs, David Gilmour on his solo record 'On an Island', written a song for Sinead O'Conner, and worked with other rock bands and pop stars including KT Tunstall, Tom Odell, Ash and The Cinematic Orchestra, as well as avant-garde electronic artist Amon Tobin re-composing the electronic music for symphony orchestra, performed to a sold out Royal Albert Hall. Eshkeri composed a symphonic tone poem about a Korean artist for the Louvre in Paris, and conducted the work to projected visuals of the art to thousands in the gardens of the Louvre. He has collaborated with infamous British art duo Jake & Dinos Chapman, legendary naturalist David Attenborough, and fashion brands, dancers and astronauts.

Amongst his extensive catalogue of film & television are multiple Oscar & BAFTA winning films such as Still Alice, The Young Victoria and Shaun The Sheep. Eshkeri has been nominated for an Ivor Novello, as well as nominated for a BAFTA for The Snowman & The Snowdog, where he co- wrote the hit 'Light The Night'.