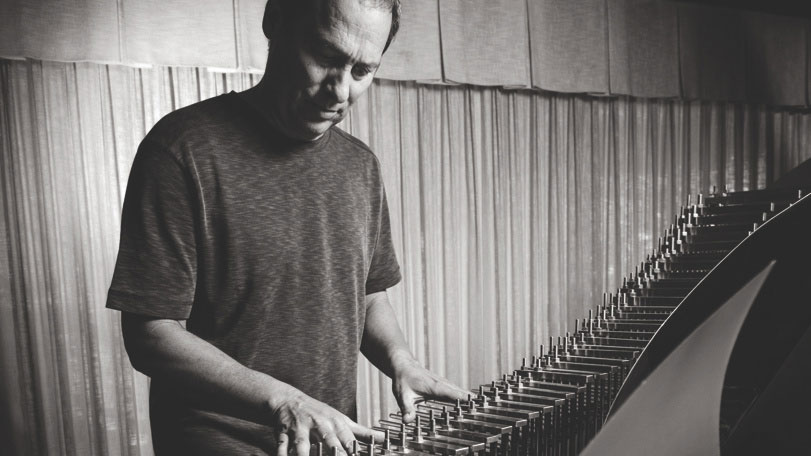 On the western verges of the San Fernando Valley, surrounded by an array of custom-constructed instruments — mammoth steel drums, a gamelan metallophone, and the awe-provoking Baschet Cristal, whose spiky protrusions suggest a Mars Rover as much as anything musical — film composer Cliff Martinez wages war with the ordinary. He has hewn a singular path in the scoring of contemporary cinema by channeling his imagination through this gallery of unique musical implements. Influenced by developments at the radical fringes of music making, pulling notes from minimalism and ethnographic melodies alike, Martinez has lent his talents to a diverse assortment of movies and in so doing, has pointed toward the horizon, to what film music could become.
Cliff Martinez playing Baschet Cristal - © Robert Charles MannCertainly his recurring collaborations with pathbreaking directors on the order of Steven Soderbergh (Traffic, Solaris) and Nicolas Winding Refn (Drive, Only God Forgives) have done much to cement Martinez as a composer whose output seems always to point toward emerging trends in film scoring. The roster of other recent films abetted by Cliff Martinez scores includes The Lincoln Lawyer, Spring Breakers, Arbitrage and War Dogs.

Cliff Martinez was born in the Bronx and raised in Ohio, moving to California in 1976, just in time for the upheaval occasioned by punk. His stints as drummer for The Weirdos, Lydia Lunch, Jim Thirwell, The Dickies and most notably The Red Hot Chili Peppers, variously preceded and followed a resume item of signal importance in Martinez’s past, the evidence of which is close at hand. The front hall of the composer’s Topanga Canyon home-cum-studio sports framed album art from the landmark late ‘60s album Trout Masque Replica, signed by “Don,” a testament to Cliff’s one-time role as drummer in the final incarnation of legendary iconoclast Captain Beefheart’s (a.k.a. Don Van Vliet) Magic Band.

It could not have been an altogether bad thing, to be caught up in the mounting buzz surrounding the Red Hot Chili Peppers in the early years of the 1980’s. Cliff Martinez was the drummer and co-writer on that band’s first two albums. His stint with the Peppers came with corollary benefits, such as the band’s rehearsing for months at a stretch in the Detroit living room of their producer, Funkadelic overlord George Clinton. But it was during this period that the band’s drummer spent increasing amounts of studio time in thrall to a recently introduced sampling drum machine, a device that, to Cliff’s mind, held the potential of an entire band within a box. In part, it was his investigation of advancements in music technology that would lead ultimately to Martinez abandoning rock drumming for a career in film scoring.
Cliff Martinez’s entrée into music for film happened by serendipitous means, when a tape collage he had constructed (“Several of my friends making aggressively weird noises, which I assigned to pads on a MIDI percussion controller.”) led to an opportunity to score an episode of comedian Paul Reuben’s transgressive mid-‘80s TV hit, Pee-Wee’s Playhouse. That same sound collage was heard, in turn, by Steven Soderbergh. Prior to his rise to prominence, director Soderbergh tapped budding composer Martinez to provide the music for the former’s first theatrical release, sex, lies and videotape. The film’s success launched a new era of independent filmmaking, did much to establish the Sundance Festival as an arbiter of new directions in cinema and put Cliff Martinez in the ring as a contender within the latest crop of film composers.

Film music, in its current incarnation, is a truly post-modern animal. It looks to a future of limitless sonic manipulation and electronic texture — those colors once deemed unearthly but now commonplace within a computer-abetted reality — while retaining its footing in the classical appropriations and acoustic instrumentation of Hollywood’s first century. Pick any among the recent films scored by Cliff Martinez and what is heard reflects the work and mindset of a composer who has not only reconciled this seeming dichotomy, but feeds on the friction between past and future of music for cinema, in order to create something new under the sun.
Hearing a given cue from director Brad Furman’s The Lincoln Lawyer (2011) is to enter a realm when speed, fear, hubris and adventure collide to great effect. Harmony Korine’s audacious tale of collegiate hedonism gone tragically wrong, 2012’s Spring Breakers, finds its perfect compliment in the spacious ambiences and gnarly electronic surfaces crafted by Martinez. Orchestrations that nod to the achievements of other film composers (Martinez openly admires the work of the great John Williams) are gene-spliced within compositions only possible with the advent of digital synthesis and signal processing. It seems inevitable as such, given his attraction to music’s terra incognita, that Martinez would enter the open-ended realm of composing for video games, as evidenced by his work on Ubisoft’s Far Cry 4. Regardless of the platform, whatever the project, the imprint left by Cliff Martinez is easily enough recognized: Music that is by turns wry, propulsive, mysterious, invigorating and, through its originality, perpetually arriving.

Aldous Huxley, a figure identified with the antipodal fringes of experience, noted “What the cinema can do better than literature or the spoken drama is to be fantastic.” The English author’s words go some distance toward defining Cliff Martinez’s distinct franchise within the world of film music. Abetted by curiosity for all that is new and otherworldly — whether in music software or the intangibles of timbre and tonality — the man who once drummed continuously for 72 hours, prior to his successful audition for Captain Beefheart, today continues to push the boundaries of what might be considered ‘fantastic’ in film scoring.